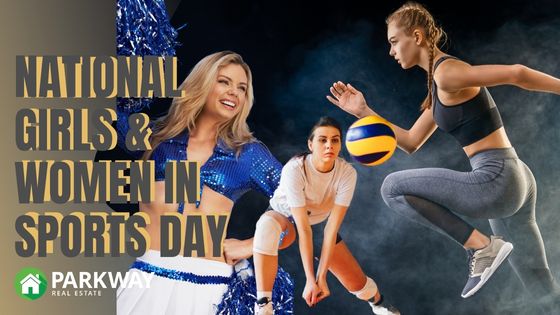 Growing up, I was involved in many sports. By high school, I mainly stuck with soccer, basketball, cheerleading and softball. After graduation, I missed the connection that sports gave me and in college I decided to try for a club team. I had considered crew until I learned they got up early in the morning and it was usually cold out on the water. So what did I do? I immediately signed up for rugby! 🏉Yes, rugby! I made some lifelong friends, got to travel a bit, and play against some really great schools. By the next year, I had also tried out for the cheerleading team and ended up doing both for many years. I’m not sure you can have a more opposite sport to rugby than cheerleading, but both really suited me socially and athletically.

Boys (literally) supporting girls in sports at the BRHS pep rally in 1996. In the annual tradition football players do a routine with the cheerleaders to pump up for homecoming. That’s me in the back middle!

Now that I am a mom, I can look back on these times and I’m thankful that my parents placed an emphasis on sports for myself and my brother. Of course, schoolwork came first but they made time for us to do the things that we loved. My husband and I have placed a similar focus on the importance of teamwork, responsibility, and commitment; My own children have tried many of the same sports, and even more. They’ve done karate, swimming, flag football, tackle football, etc. You name it and they have tried it! Now that they are older, they settled in as three sports athletes but when they were little, we tried to give them as much exposure as we could to all the options.

What I never knew growing up was just how unique it was for me to be involved in so many sports as a female, and some at a high level. Many of my friends played sports also, but there were a few sports that just didn’t seem open to me, and I never really asked about them. Hockey would be a great example: I didn’t know that females played hockey until after high school. I can clearly see now that the world of female sports was just starting to bloom around my time and while it has ascended rapidly, it is still not where it needs to be. I can see this now as an adult, clearly, and more and more stories are coming out that really encourage me as the parent of a female athlete.

For example, when my daughter continued to play baseball well past the age that most of her peers moved to softball, she joined an all-girl baseball team called the Boston Slammers. They are a competitive group of girls from all over New England who travel the country to play other all-girl organizations. On one of these trips, in New Jersey, we had the opportunity to meet Maria Pepe. You may be unfamiliar with her name, but certainly you have heard the term Title IX. Well, Maria is the 12-year-old girl who sparked this change. Her story was inspiring, and just 50 years later so much more needs to happen. My daughter did end up changing to softball, but on her terms. Not because society said she had to.

My daughter meeting the late great Shirley Burkovich and the “baseball cane wielding, still throwing baseballs at 90” Maybelle Blair. Both were professional baseball players for the AAGPBL and the inspiration for “A League of their Own”

On the same trip, where my daughter was selected by Major League Baseball as a top 96 female baseball player in the USA and a two-year member of their “Trailblazer” camp in California, we got to meet professional softball pitcher Jenny Finch. College National Champion, Olympic Gold Medalist, and all around great role model for girls in sports.

Young girls need to know the ball is in their court when it comes to sports. So, I was thrilled to learn that there is a National Girls and Women in Sports Day (NGWSD) celebrated by many schools and organizations annually around the first week of February. Any time we are trying to pick folks up and equalize the room it is important to celebrate both where we have come from and where we are going!

While there is still a large pay gap, and more respect needed in general when celebrating female athletes, many female athletes are becoming household names. For instance I’m sure you are familiar with Lindsay Vonn, Mia Hamm, Simone Biles, Jenny Finch, and – let’s be honest – Serena doesn’t even need a last name! Foster this movement by teaching your own friends & families about your favorite women in sports! Here are some suggestions:

Caroline Ducharme goes up for a layup against Villanova. Caroline went to high school in Massachusetts.

What are your celebrating on National Girls & Women in Sports Day  (#NGWSD) this year? Shout out your favorite aspiring athlete, role model, or event!